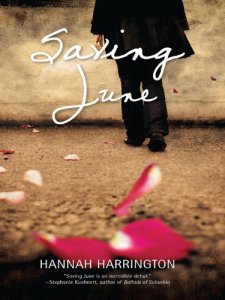 Everyone’s sorry. But no one can explain why. Harper Scott’s older sister, June, took her own life a week before high school graduation, leaving Harper devastated. So when her divorcing parents decide to split up June’s ashes, Harper steals the urn and takes off cross-country with her best friend, Laney, to the one place June always dreamed of going—California. Enter Jake Tolan, a boy with a bad attitude, a classic-rock obsession…and an unknown connection to June. When he insists on joining them, Harper’s just desperate enough to let him. With his alternately charming and infuriating demeanor and his belief that music can see you through anything, he might be exactly what Harper needs. Except…Jake’s keeping a secret that has the power to turn her life upside down—again.

In the Forests of the Night: The Goblin Wars, Book Two by Kersten Hamilton:

The battle against goblinkind continues . . . but which side will Teagan be on? Teagan, Finn, and Aiden have made it out of Mag Mell alive, but the Dark Man’s forces are hot on their heels. Back in Chicago, Tea’s goblin cousins show up at her school, sure she will come back to Mag Mell, as goblin blood is never passive once awoken. Soon she will belong to Fear Doirich and join them. In the meantime, they are happy to entertain themselves by trying to seduce, kidnap, or kill Tea’s family and friends. Tea knows she doesn’t have much time left, and she refuses to leave Finn or her family to be tortured and killed. A wild Stormrider, born to rule and reign, is growing stronger inside her. But as long as she can hold on, she’s still Teagan Wylltson, who plans to be a veterinarian and who heals the sick and hurting. The disease that’s destroying her—that’s destroying them all—has a name: Fear Doirich. And Teagan Wylltson is not going to let him win.

When Belle meets Luke, son of an alchemist and Scribe to the famous poet Chaucer, she is determined to travel with him to Canterbury on a pilgrimage. She hopes for a miracle: that her father will walk again. She also hopes to atone for her own part in his accident. It is a time of unrest across the country and the young King Richard II is just hanging on to his throne. A malign character on the pilgrimage suspects Chaucer of treason and slowly winds Belle into a political intrigue. At the same time, the impulsive Belle is drawn towards both Luke and to Walter, the wealthy son of a Knight. But Walter himself is in love with Luke…As the uprising against the King starts to draw pace and the web of intrigue around Belle and Chaucer tightens, Belle and her friends must risk everything to save their country and themselves…

Katelyn McBride’s life changed in an instant when her mother died. Uprooted from her California home, Katelyn was shipped to the middle of nowhere, Arkansas, to her only living relative, her grandfather. And now she has to start over in Wolf Springs, a tiny village in the Ozark Mountains. Like any small town, Wolf Springs has secrets. But the secrets hidden here are more sinister than Katelyn could ever imagine. It’s a town with a history that reaches back centuries, spans continents, and conceals terrifying truths. And Katelyn McBride is about to change everything. Broken families, ageless grudges, forced alliances, and love that blooms in the darkest night—welcome to Wolf Springs.

The Futur of us by Jay Asher & Carolyn Mackler:

It’s 1996, and less than half of all American high school students have ever used the Internet. Emma just got her first computer and an America Online CD-ROM. Josh is her best friend. They power up and log on–and discover themselves on Facebook, fifteen years in the future. Everybody wonders what their Destiny will be. Josh and Emma are about to find out. 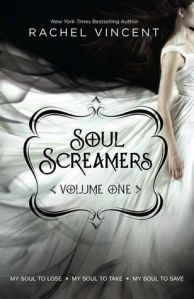 Soul Screamers Volume One: My Soul to LoseMy Soul to TakeMy Soul to Save by Rachel Vincent:

MY SOUL TO LOSE — The prequel: never before in print! — Kaylee is just your average girl shopping at the mall with friends—until a terrified scream burst from her that cannot be stopped. Taken to a hospital ward, will she be able to save her mind—and her life? MY SOUL TO TAKE She always felt different, but now Kaylee discovers why. The screams that cannot be denied mean that someone near her will die—and she can never save them. Because saving one life means taking another… MY SOUL TO SAVE Going on dates with her boyfriend is still new to Kaylee. But when the singer of the band they’re seeing dies and Kaylee doesn’t scream, she knows something carzy is going on. Soon she discovers soul can indeed be sold… 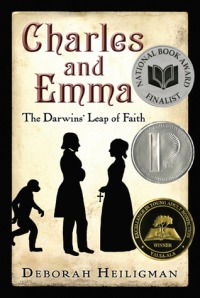 Charles and Emma: The Darwins’ Leap of Faith by Deborah Heiligman:

Charles Darwin published The Origin of Species, his revolutionary tract on evolution and the fundamental ideas involved, in 1859. Nearly 150 years later, the theory of evolution continues to create tension between the scientific and religious communities. Challenges about teaching the theory of evolution in schools occur annually all over the country. This same debate raged within Darwin himself, and played an important part in his marriage: his wife, Emma, was quite religious, and her faith gave Charles a lot to think about as he worked on a theory that continues to spark intense debates.Deborah Heiligman’s new biography of Charles Darwin is a thought-provoking account of the man behind evolutionary theory: how his personal life affected his work and vice versa. The end result is an engaging exploration of history, science, and religion for young readers.

The Lost Saint: A Dark Divine Novel by Bree Despain:

A family destroyed. A love threatened. An enemy returns. Grace Divine made the ultimate sacrifice to cure Daniel Kalbi. She was infected with the werewolf curse while trying to save him, and lost her beloved brother in the process. Desperate to find Jude, Grace befriends Talbot, a newcomer to town. But as the two grow closer, Grace’s relationship with Daniel is put in danger – in more ways than one. Unaware of the dark path she is walking, Grace begins to give into the wolf inside of her – not realizing that an enemy has returned and a deadly trap is about to be sprung. Bree Despain delivers sizzling romance and thrilling action in the heart-pounding sequel to the The Dark Divine.